The City of Porto (wiki) 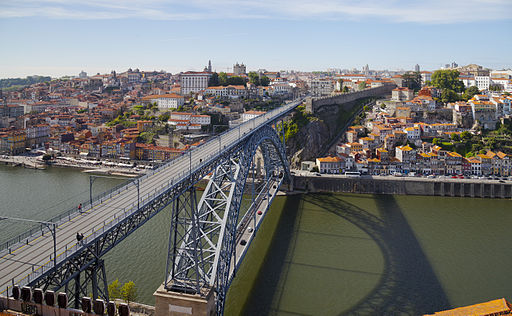 Located along the Douro river estuary in northern Portugal, Porto is one of the oldest European centres, and registered as a World Heritage Site by UNESCO in 1996. Its Latin name, Portus Cale, has been referred to as the origin for the name “Portugal”, based on transliteration and oral evolution from Latin. In Portuguese the name of the city is spelled with a definite article as “o Porto” (English: the port). Consequently, its English name evolved from a misinterpretation of the oral pronunciation and referred to as “Oporto” in modern literature and by many speakers. In recent years, UNESCO recognised its historic centre as a World Heritage Site.

The Ribeira is one of the oldest and most typical places of the city of Porto.
Located in the parish of St. Nicholas, along the Douro River, is part of the historic center of Porto and also an UNESCO World Heritage Site. It is a very beautifull area, usually frequented by tourists and has a very high concentration of all types of bars and restaurants.

The Casa da Musica (House of Music) is a major concert hall space in Porto, Portugal which houses the cultural institution of the same name with its three orchestras Orquestra Nacional do Porto, Orquestra Barroca and Remix Ensemble. It was designed by the Dutch architect Rem Koolhaas with Office for Metropolitan Architecture and Arup-AFA, and was built as part of Porto’s project for European Culture Capital in 2001 but was only finished in the first half of 2005 and immediately became an icon in the city.